Luxury Tax: pay $75.
Then add your luxury item to your bike touring gear and carry it thousands of km’s. Just like Monopoly, luxury really does cost on a bike tour.
A loaded bike is harder to push up hill, so each of our belongings takes extra consideration. Experienced bike tourers put thought into our non-essential items, and maybe shell out a little extra to buy them. So what are experienced riders letting weigh them down while on tour?

What is Your Luxury Item

I asked 9 experienced bike tourers “What’s your luxury item?”. You can fill out the survey here.


What are we allowing to weigh us down, yet helps us get to the next campsite? Here are the answers. Dropping any bike, let alone a fully loaded touring bike, is tragic. Paint gets scuffed, vegetables get smushed and shifters get dinged. The solution? An extra kickstand to keep the bike level when parked. Coffee is one of the most consumed beverages in the world, but that doesn’t make it easy to enjoy one camping or on a trail. Packing the right equipment to warm yourself up a cup-a-joe is critical, especially on a cold or early day. Camp chairs on bike tour is a popular guilty pleasures. There’s no doubt comfort is king after (and during) a long days ride. And when wild camping, at a camp site without a table or sitting fire-side, these are always handy. The first person I met bike touring with a solar panel was Bill. Unmistakable, the dark grid was dutifully  strapped over his panniers on the back. He seemed to like it, and his phone was always charged. Get your veggies! Memorable camp meals are made fresh, so stop frequently at the local market! Bike tourers love their jams, and bluetooth speakers are essential items on the trail and at camp. Charge them while riding in your handlebar bag, then let ‘er rip! Is it safe to ride with headphones in? One way or the other, we see riders doing it all the time. What better time to get a few episodes of Pedalshift or spanish lessons in? Relics of a bygone era made the cut. It might be beacuse their digital relative DSLRs are see as essential. Back to coffee. So important.
In most cases, luxury is a line to be drawn by us, and one bike tourers luxury might be another’s necessity. That fine line between luxury and essential is further explored online.
Click Here to join the Tasis Bikes Insider Update mailing list.

The conversation continued on Facebook and Reddit about luxury items for bike touring. From the comments, tourers mostly agreed with my 9 riders above, and there’s also a discussion about what is essential and what is luxury.
Here are some items that ride that edge between necessary and luxury. That means some bike tourers don’t ride without some of the following: Many thanks to the participants of the Tasis Bikes tester survey Jack, Tim, James, Zsolt, Tyler, Dan, Jack, Katherine and Paul! And shout out to Facebook and Reddit bike tourers, all legends.
Many riders I've spoken with want more information on the best brands of camping chair for bike touring, so I created this list to answer the question. Feel free to follow the link below and enter your email address to see the list.

Get instant access to watch Sea To Sky by entering your email address. The movie is a bike touring short film, taking you from Vancouver up the Sea To Sky in the Squamish valley. The film feature FAT WRAP, and independent bike touring product. 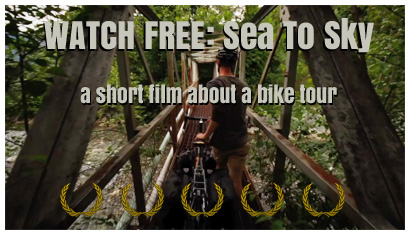 ← Back to Tasis Bikes blog

Enter your email for the insider update